Your cart is empty.
View designs
Product is not available in this quantity.
Get in touch  

"Architopia saved me time, money, and energy. Now I live in a beautiful architecturally designed home." 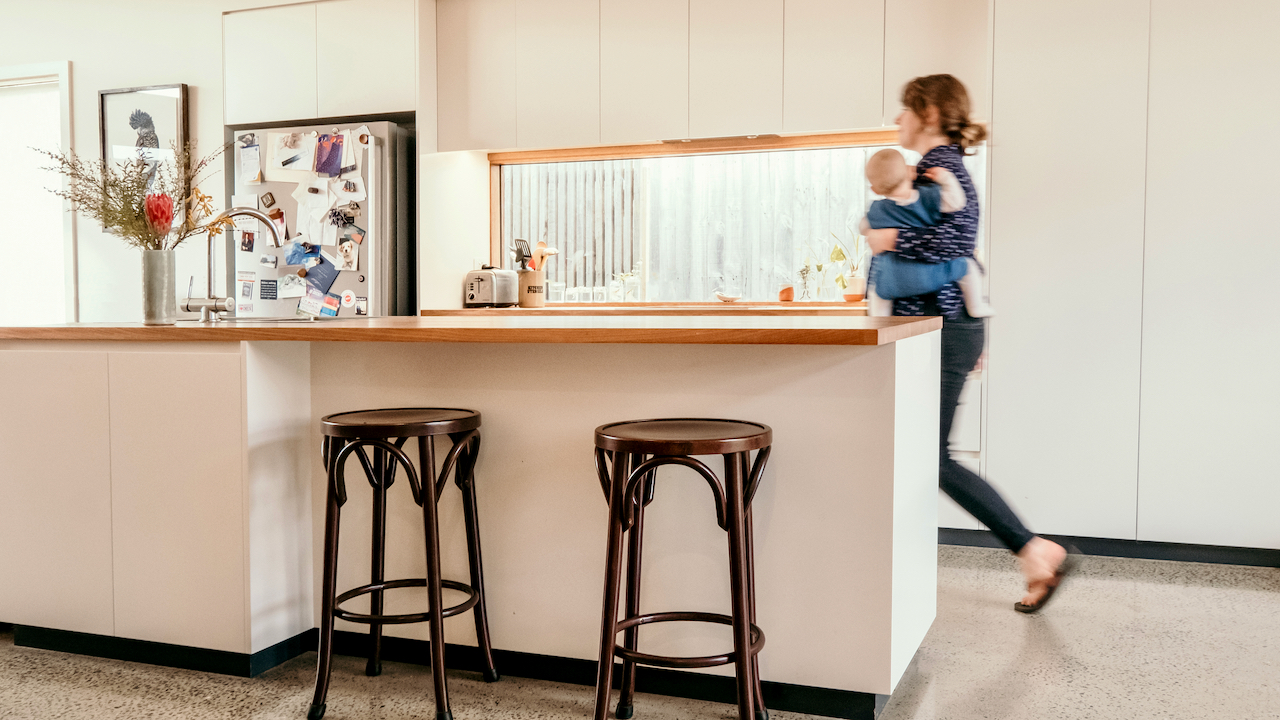 At Architopia, we specialise in designing cost efficient architectural homes. We sat down with one of our customers, Athena, to discuss her experience building the Offset House.

Upon arriving at Athena's home we immediately notice the difficult site orientation. “Our block is really tricky because our front door faces north.” Athena tells us. “So it was really hard to find a design that would get lots of natural light into the living areas. But with this [Offset House] design it’s just wonderful, it’s so light filled. And no matter where I stand in our house I can see greenery outside. I absolutely love it.”

Athena, 31 years of age, is married and has a one year old daughter. “My partner and I had both lived overseas and when we returned we were looking to put roots down. We had been renting for quite a while, so we were starting to look for a place that we could make into a long term home”.

We ask Athena why she decided to build instead of buying an existing home. “To be honest, the prices of existing homes were out of our price range. We crunched the numbers and building a new home was going to be cheaper for where we wanted to live.”

Athena tells us that her partner has an eye for design but neither of them had ever built a house before. “We visited display homes and talked to friends that had built homes before” she told us. “The display homes were fine, but they didn’t really speak to us. We’re very environmentally conscious people. We wanted to build a house that was as environmentally sustainable as possible for our budget, and that wasn’t something that any of the display homes prioritised”.

We ask Athena if she considered using an architect to design their house. “We called two or three architects, but when we told them our budget they all told us that it just couldn’t be done, or at least that they couldn’t help us.” Unfortunately, this is a story we often hear from customers.

“It was a bit frustrating because our needs were pretty simple. We wanted a three bedroom house with two bathrooms and a European laundry. We wanted some outdoor green space, and as much natural light as possible. Other than that we were really flexible”. Efficient use of space was also important to Athena. “I didn’t want to waste a single metre because our budget was very very tight. There was no room for error in our budget”.

Building on a budget.

After purchasing an Architopia design (Premium Package) they found a builder by walking around their local area and finding other homes they liked the look of. “We found out who built them and gave a few of the builders a call. It turned out to be pretty easy.”

Because Athena had a strict budget we're keen to hear how the quoting process went with the builder. “We were just really honest and upfront. We told them that our budget was $270,000 [in 2018] and asked if they could build it for that price. Because we had the Architopia pack we were able to get a really accurate quote from the builder. Initially it came back a bit more expensive than we could afford so we just worked with the builder and changed a few items and materials. We went back and forth until it matched our budget. After we got the price right we signed a contract”.

Image: The large centrally located kitchen in the Offset House.

Architopia design packages don’t include engineering documents or site specific requirements such as surveys or soil tests, so we ask Athena if that generated any problems or delays. “Not at all. We didn’t actually have to do anything. Our builder was able to help with all of that. He organised it all and included it in his price”.

“The building process was pretty stress free for us. I think because we provided so much information and had thought long and hard about what our priorities were. There were no big surprises or delays. It was built on time and on budget.”

Speaking of budget... “It was spot on from the initial quote. Because we were so honest and upfront from the start, and probably because we had all the plans and information [from Architopia] when we first approached the builder.”

We finish up our conversation by asking Athena if she has any advice for others who might relate to her situation. “I’d say, even if you’ve got a small budget, you’d be surprised what you can achieve. There’s such a desire and awareness now among people that aren’t millionaires and can’t afford an architect, but still want a more sustainable and sophisticated home. Something that’s unique, long lasting and beautiful. It's important because where you live really does have such an impact on you. The space you inhabit [your home] influences your happiness, your relationships, really everything.”

Image: Athena and her family enjoying life in the Offset House.